The biennial West Coast Conference (WCC) of the American Society of Dowsers is being held this year at UC Santa Cruz starting at the end of June.  I’ve been making labyrinths at the WCC for 30 years.  In 1989 I made the triple spiral design with Nicolas Finck.  The next year I made my first design, the Figure 8 design (drawing on left).

It was based on the cracks in a standing stone on the top of a cairns at a spot on Point Reyes CA (photo below right) which was one of my favorites.  After that I made a new, never been walked, labyrinthine design every year. For many years I did surveys collecting people’s experiences.

For at least 20 years, I have put my new design on the plaza in College 8 (now Rachel Carson) in chalk and a Cretan (below left) on grass up near registration. 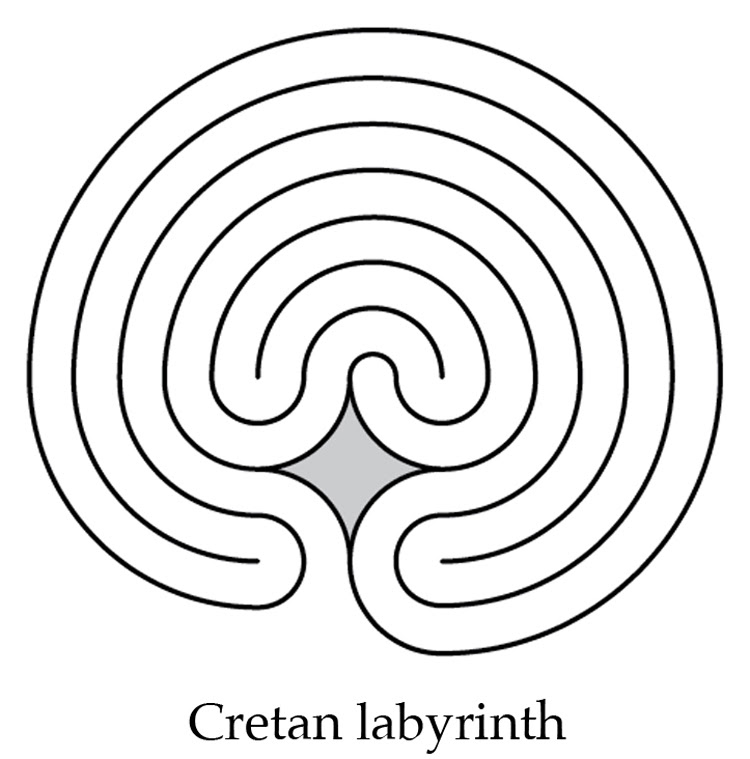 A Labyrinth Plan for 2018 Conference

This year the conference is being held at Stevenson College while Rachel Carson is renovated.  I went down with WCC committee members to check out sites for the grass Cretan and the chalk design.  Stevenson has a centrally located plaza with an old Oak tree at the west end which will provide natural shade for the vendor tables.

The only place for a decent size chalk design is on the south edge of the plaza, a little east of center (google earth view of Stevenson College, the plaza site is marked by a red dot and the Letter L.) 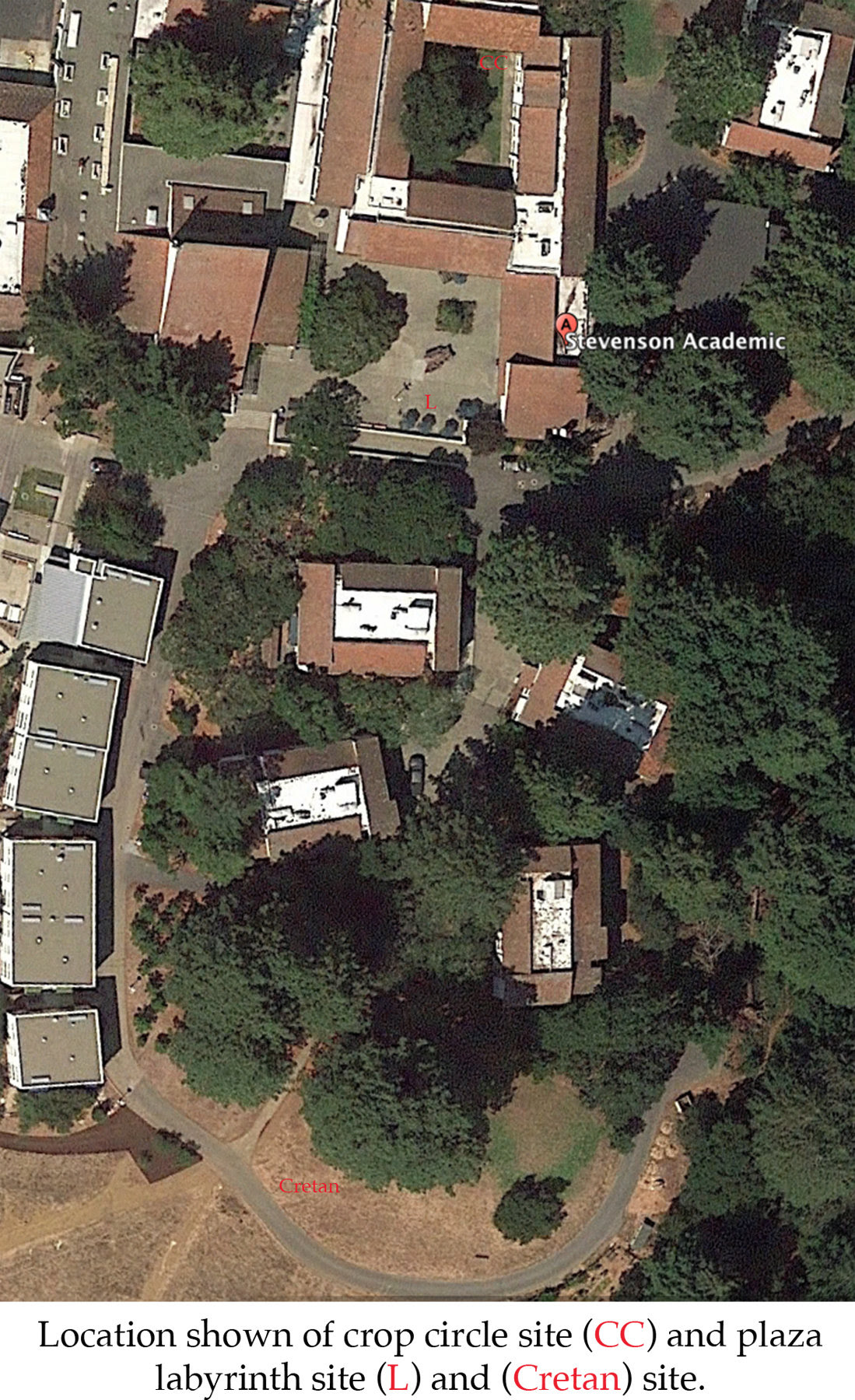 We walked down to the south edge of the campus where an unimpeded view of part of the Great Meadow can be seen.  With the ocean in the distance.  Fantastic view.  When we were there on a sunny day, the area was filled with perhaps two dozens students lying on the grass.  Only problem it was ~420 feet from the plaza.  Barry Christian suggested a courtyard area closer to the plaza (~120 feet).  It was a neat place with a large Oak at the west end, and adequate space for a Cretan on grass.
It had an added feature that a path from the parking area to the plaza ran on the east side of courtyard, so many attendees would get a nice introduction to the conference.  Because of the view and it being a nice getaway from conference activity, I chose the Great Meadow site.  Then I thought that why not put a simple crop circle design in the courtyard site as an introducing element.
When I returned I looked at Stevenson College on Google earth and located the three places for this year’s designs.  Using the edge of the ruler I found that they lined up in a straight line!  A month later I went down for a second look.  I went to the courtyard first and as I walked around the space, a site popped out to me.  I dowsed its exact location.  Then I asked if there was an energy line present, Yes, it ran through my site I picked and it ran south towards the plaza.  On the plaza it went through the site of the chalk design, and I located the site for the Cretan on grass design at the great Meadow area, and the energy line ran through it.

I dowse that the bull’s eye crop circle (above left) would be appropriate for the courtyard site.  I have not made it before so I don’t know its effect.  For the plaza design, I thought I would base the design on a recent crop circle.  I searched through my crop circle year put out by the Alexanders.  In the 2014 edition I found a crop circle based on a unicursal hexagram, drawn with a single continuous path.  (above middle) .  So I made a unicursal hexagram which is very labyrinthine (above right).

An Energy Line Runs Through It…

I first thought  that I had found an energy line from a ley line.  My definition of a ley line is a straight line alignment of three or more notable sites.  A notable site can be a standing stone, or a stone circle, or a holy well, or it could be from a labyrinth or other unknown sources.  But after thinking about for a while, I realized that I didn’t have enough information to say the energy was from an existing ley line.

I found an energy line and its source could be several possibilities.  It could come from a standing stone.  Every standing stone I dowsed when I was in England in 1986, and there were dozens, had two energy line running through them, perpendicular to each other and meeting in the stone.

I had made a very small standing stone near the entrance of a rock 3 ring Cretan that I made on the Art Line in Nevada. (photo left). 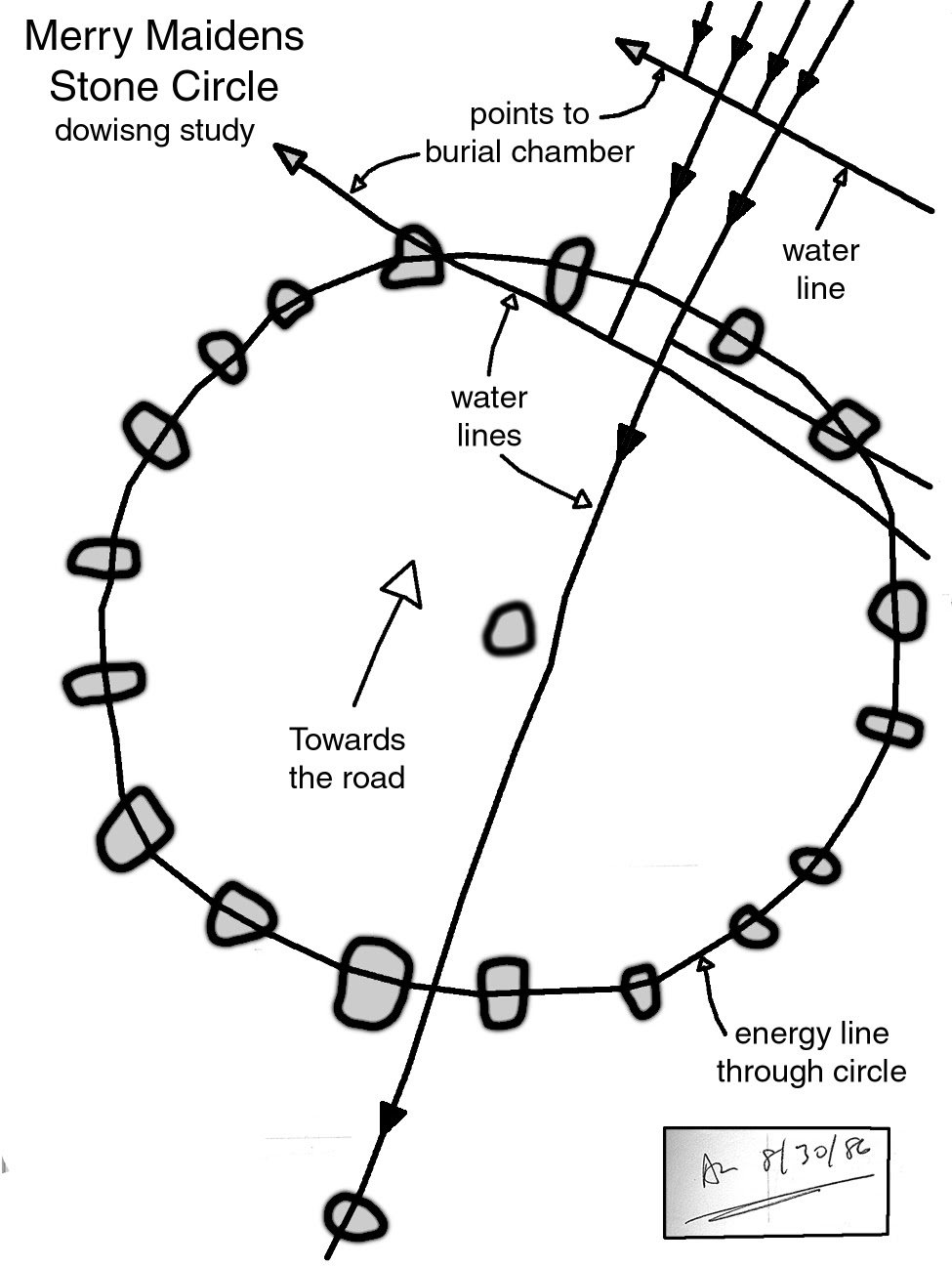 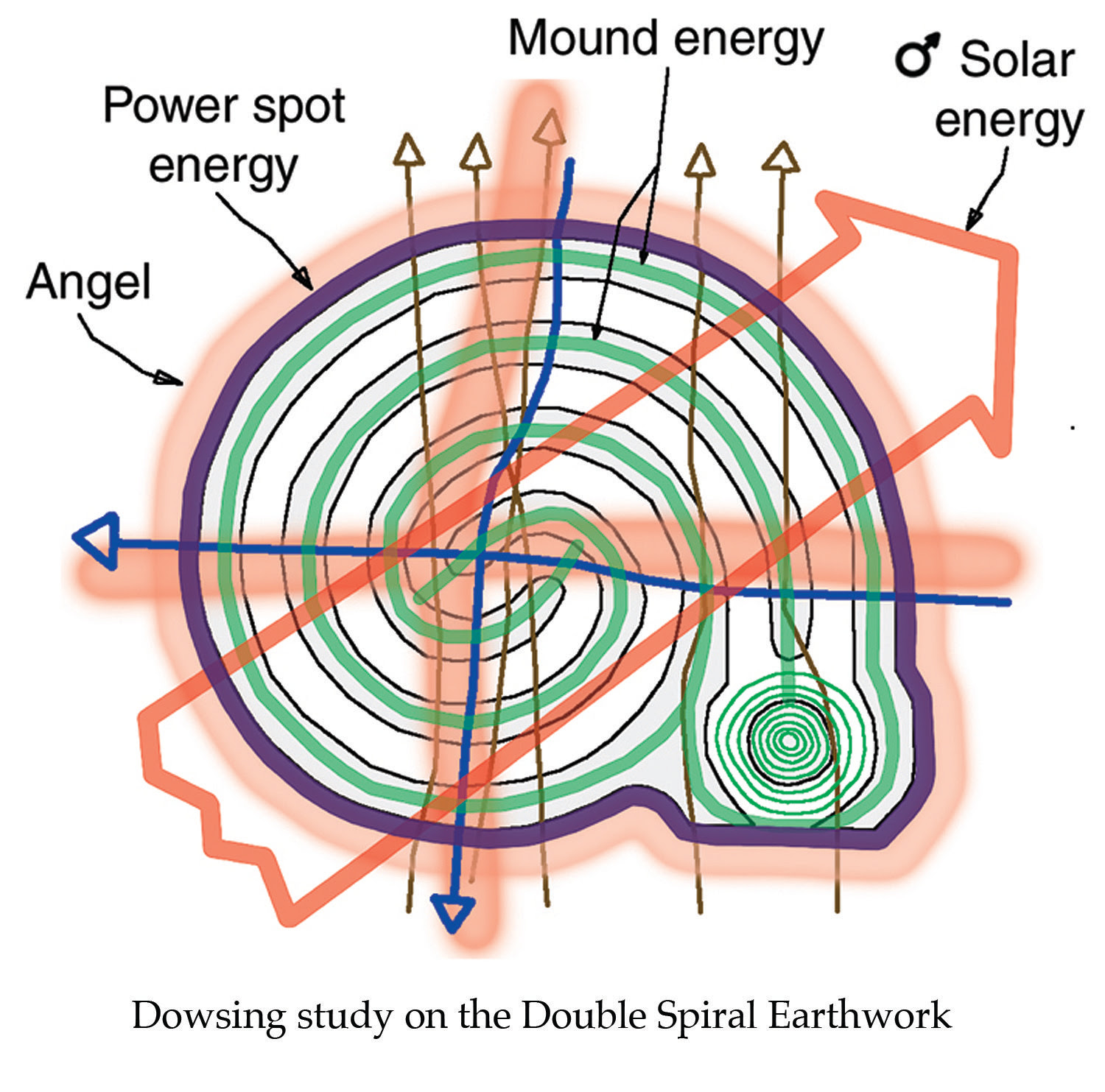 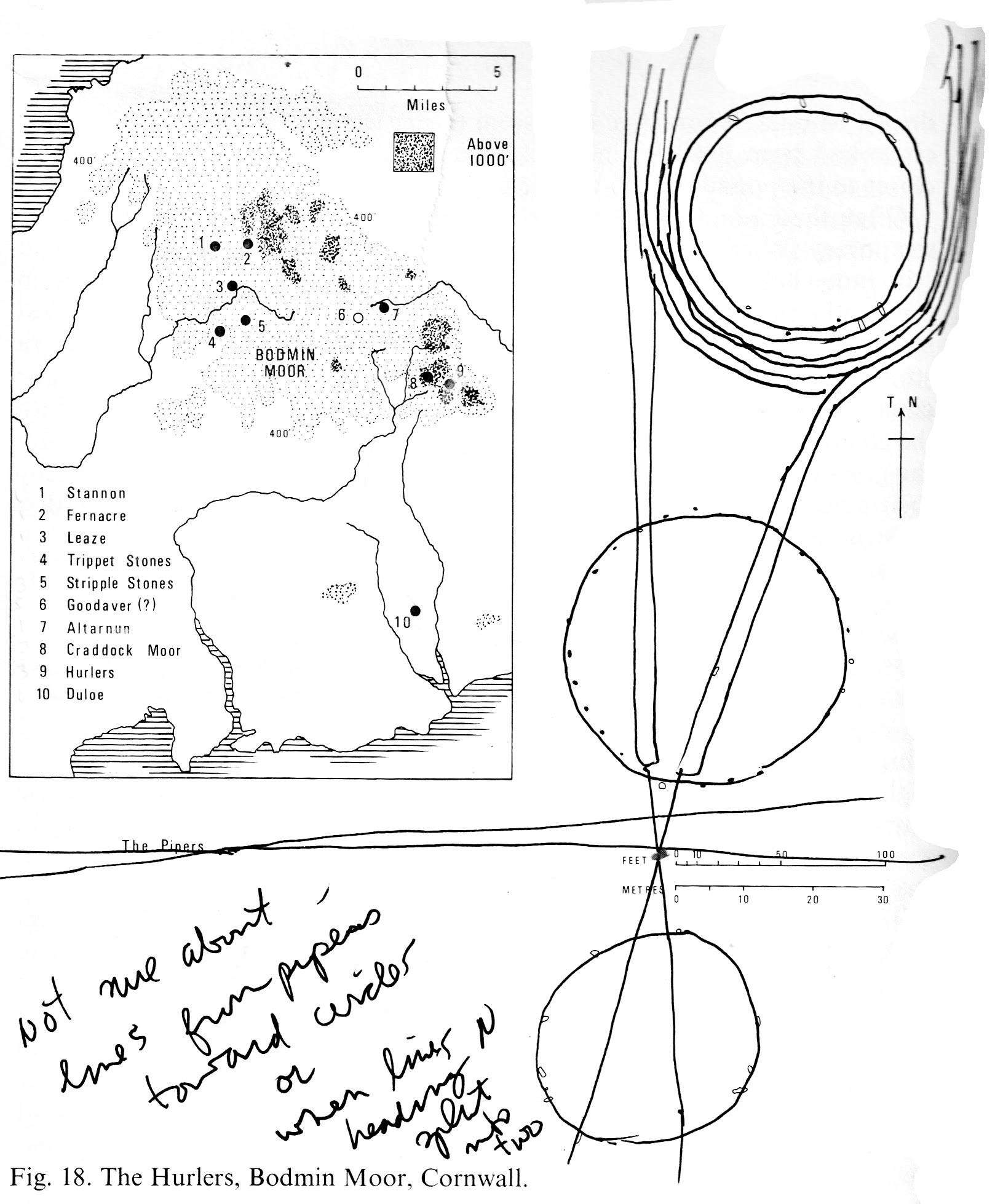 I made over 40 earthworks and every one had several types of energy lines that ran through them and on beyond them (photo double spiral dowsing study).  I never followed any line leaving the earthwork very far.  I remember asking how far by dowsing and received that many of the lines went around the world.  That was one of those answers in which I would have to do a lot work to confirm, so I didn’t think about it.

The Stevenson energy line could  be from energy generated by a ley line.  That’s one of several possibilities.  In England, many ley lines are made with stone circles and standing stones, each of which is capable of generating energy lines.  One would have to orient each structure so that their line ran along the ley lines.

If there was no existing energy line, proper alignment of the Cretan, six pointed star, so that the energy ran along their straight line alignment would create a very high energy in itself.  The Cretan will generate power spot energy and the six pointed star Yod energy, and will those two combined they produce a higher level energy.  I saw this before with meander wand design (Image below).

I will be making a ley line on top of an existing energy line.
Over the past 30 years all my designs have been independent of each other.  One year I made a cross of four labyrinthine designs, and the energy at the center was quite high.  This year I was making was a ley line.  I know that I can site  the Cretan and hexagram so that their energy will flow along the ley line.  Their combined energy will create a high level energy.  A circular design will draw in energy to its center and then send energy out the circle at a higher frequency energy.  A circle will purify the area where it’s in.  What will happen when the Cretan and Hexagram combined energy hits the crop circle is hard to predict.
So the newly created energized ley line will interact in some unknown way and may result in a even higher level energy.  To modulate the effects of supposed higher energy line, the following prayer will be imprinted into the ley line, may everyone who experiences this energy do so according to their needs.

Another possible effect of adding energy to an existing energy line may increase its width, which I dowsed to be. four feet wide.

After determining the three sites I sat at a table on the plaza and watched how the students used it.  My seat was off the line, a student sat a table that was on the line.  He left and I went and sat on the line.  Within moments, I started pulsing, a full body pulse. I left and went back to the table off line.  the pulsing stopped.  I went back and sat on the line, and the pulsing reappeared.  Later when the three committee members joined me in the plaza, I asked them to sit at the table on the line.  Sarah, across me, said almost immediately, I am buzzing.  Then moments later, no really, I’m really buzzing.  Birute on my left reported that, Yes, I did feel a buzz.  It was subtle but clear. , and Carol on my right said, Yes, I definitely felt something.  It wasn’t a “buzzing” but definitely something strong and powerful.  In my mind, I was persuaded that an energy was present.

The line runs, I estimate, to be 8 degrees East of North/South.   As it heads south, it enters the ocean at Santa Cruz and stays in the ocean.  North, it runs east of the East Bay and runs into the Mount Shasta area in northern CA.

Alex Champion will be creating this Ley Line at the 2018 West Coast Dowsers Conference on Saturday Morning, June 30 at 10:45 AM.
You can join him as he talks about the process and help build the labyrinths!
Alex B Champion
Earthworks and Labyrinths
(707) 546-1635
http://www.earthsymbols.com